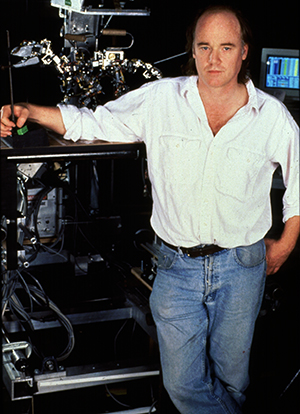 There’s a new interview with dinosaur supervisor Phil Tippett over on JurassicWorld.org. Tippett was originally brought onto Jurassic Park to create the dinosaur effects using go motion but when Spielberg decided to use CG, his role became the dinosaur supervisor. He was hired again for Jurassic World but he doesn’t say much about the upcoming movie. Here’s the relevant question:

Jack: Obviously Jurassic Park 4 has been in development for the past 10 years, having numerous release years and scripts – were you ever involved with it before Colin Trevorrow came on board?
Phil: Oh no I’ve just recently got involved and my involvement remains to be seen. We’re partnering up with ILM again on this and I’ve gone down to the offices and talked to Colin a couple of times, but the real work and my involvement has not kicked in yet.

Jack: Oh right, ok. When do you think you’ll start, within the next couple of weeks?
Phil: I don’t know, we’re still figuring that out but it’s coming up pretty soon, we’re going to start production meetings and they’re off on location scout this week, so once they get back we’ll start figuring out where to move next.

Jack: Haha, ok. So the production team are heading to Kauai, Hawaii in March to start filming, you’ll obviously be on set, you’ll join them?
Phil: I’m not quite sure because we haven’t totally laid out what my deal is and what my co-responsibilities are so at this point we’re working through figuring out, still locking down the budget which is always an ongoing process on any film that you’ll work on.

Jack: Do you know if Jurassic World is relying more on VFX this time around or will the late Stan Winston’s legendary animatronics live on?
Phil: I think there’s going to be much more computer graphics and less on-set dinosaurs.

Be sure to check out the full interview where he discusses his time on Jurassic Park.