The Mosasaurus was a carnivorous aquatic lizard that existed in the Mesozoic era of the Cretaceous period, around 70-66 million years ago in what is now known as western Europe and North America. The first skull fragments were found in 1764 in a chalk quarry in St Pietersberg, Netherlands and in 2012, a skeleton of a Mosasaurus was found in the same quarry. It is thought to be the oldest Mosasaurus skeleton palaeontologists have ever found. The creature appears in Jurassic World as a tourist attraction. 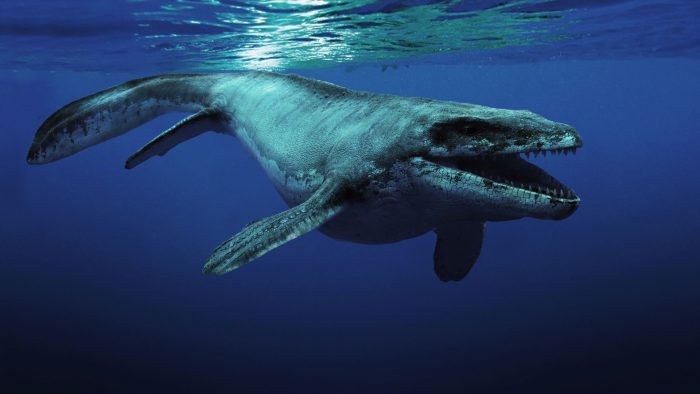 The Mosasaurus had a huge crocodile-style jaw with huge sharp teeth and had large eyes but very poor binocular vision. The creature had four flippers and a strong tail which allowed it to move effortlessly in the ocean. It could grow up to lengths of 59ft. It is believed it lived near the ocean surface feeding on fish, turtles, sharks and other small creatures and never went into deeper waters. Speaking of sharks, it’s also found that some prehistoric species of sharks were able to attack and kill a Mosasaurus.

In Jurassic World, a Mosasaurus is a tourist attraction at the park – the “Mosasaurus Feeding Show” which is a parody of what SeaWorld does with killer whales. As the audience watches a Great White Shark being dangled above the lagoon, a Mosasaurus bursts out of the water and eats it. The audience can then see it swimming under water. Later in the film, when the Pterosaurs escape and cause havoc, it grabs Zara and inadvertently drops her into the lagoon. As the Pterosaur struggles to grab her from water, the Mosasaurus jumps up and swallows both Zara and the Pterosaur. The Mosasaurus then appears in the climax of Jurassic World. When the Tyrannosaurus and Velociraptor push the Indominus Rex to the lagoon, the Mosasaurus jumps out and grabs the Indominus Rex and drags it under water, killing it.