The Tyrannosaurus rex is the most well-known dinosaur in the Jurassic Park series. It makes appearances in all three Jurassic Park movies. It lived 67 to 66 million years ago in what is now known as western North America. The largest complete skeleton is measured at 40 feet in length, 13 feet tall at the hips and weighed up to 6.8 tons. The first bone fragments from one were found by paleontologist Edward Drinker Cope in South Dakota in 1892. More fossils were found and in 1905, museum president Henry Fairfield Osborn officially named the species Tyrannosaurus Rex. The most complete skeleton of a T-Rex came in 1990 when Sue Hendrickson, an amateur paleontologist, discovered it in the Hell Creek Formation near Faith, South Dakota, on 12 August 1990. 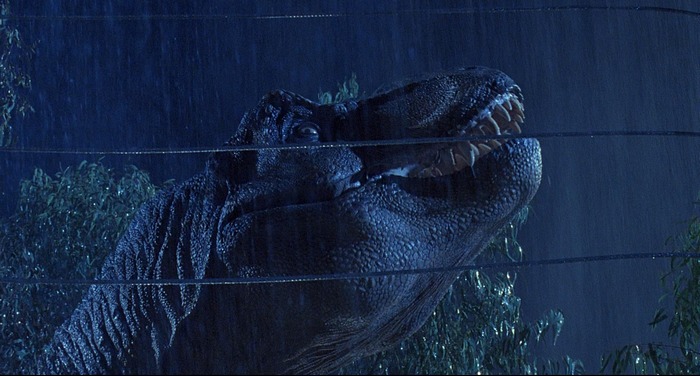 Its most distinguishing feature is its huge skull and jaw which contained razor sharp teeth, which was easily capable of biting through bones. The Tyrannosaurus rex  has the largest neck muscles of any carnivore and had an extremely powerful bite force. It also has an extremely heavy tail to ensure its balance. Another feature of the creature is their very short arms which only had two clawed fingers on them. Despite their small size, these were thought to be extremely powerful. They were perhaps used to right itself from a prone position or to hold onto its prey which it killed them. 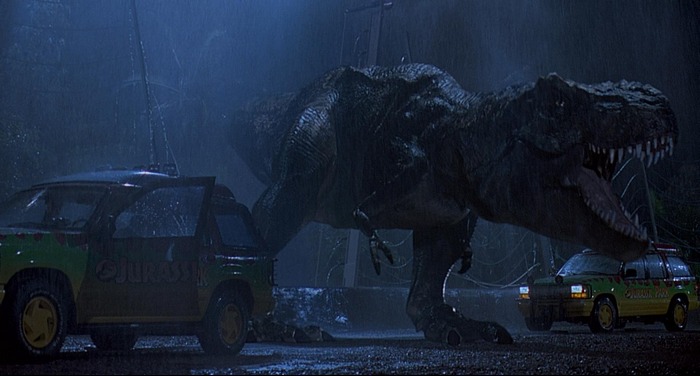 The T-Rex is capable of running up to 32 mph according to John Hammond. Out of the five Tyrannosaurus that appear in the movies, the adult female seen in the first movie, is the largest. It was 40 feet long, 16 feet tall and weighed 17,500 pounds. The young adult seen in Jurassic Park 3 was listed as being 37 feet long and about 10 feet tall. The female Tyrannosaurs are brown in colour with grey stripes on the head and tail. The males are greener in colour with dark green stripes on its nose, back, legs and tail. The females also tend to be larger than the males.

There’s a lot of debate about whether or not a Tyrannosaurs’ vision is truly based on movement. In Jurassic Park, Dr. Alan Grant says that the sight of the Tyrannosaurus rex is based on movement so if you don’t move, it can’t see you. This idea is referenced in both the first and third films. This is supported by the fact that the T-Rex always gives a huge roar causing its prey to run away. On the other hand, in The Lost World novel, Dr. Richard Levine says this concept is unlikely because many animals freeze or play dead when they are scared and thus, the T-Rex would frequently miss its prey. 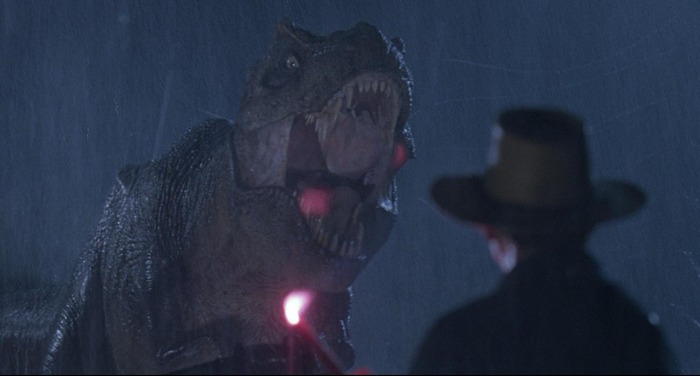 Another concept is that because the carnivores have binocular vision, they have trouble seeing their prey in the dark but can still see them perfectly in the daylight. You could apply this to Jurassic Park 3. The Tyrannosaur looked like it saw the group straight away even though they weren’t moving. Saying that, it also roared, giving the previous theory more credence. It might not have been able to see them but roared causing them to run away. The roaring could just be a warning sign to warn other predators to keep out of its territory.

In The Lost World, the Tyrannosaurus are shown to be a very protective parents. They go to great lengths to ensure their offspring’s safety and will drive out anything that is in their territory. It’s said in the film that they don’t wonder too far away from the infant and continue to bring it food for months. This is similar to birds and crocodiles who guard their nests and protect their eggs from predators. Like most predators, The Tyrannosaurus teaches its offspring to hunt once they are capable. 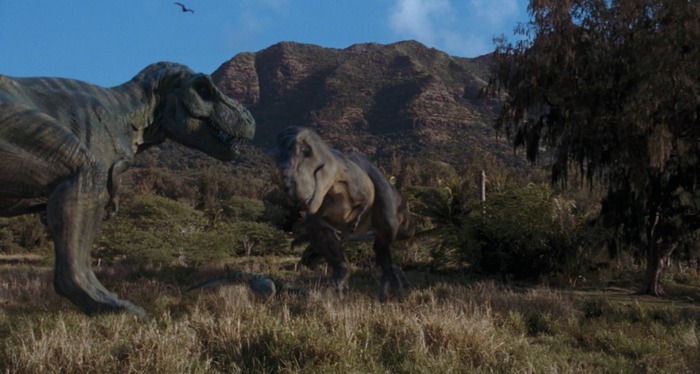 In the original Jurassic Park novel, there were two Tyrannosaurus on Isla Nublar, an adult and a juvenile version but they didn’t have kind of interaction with each other. It is said that the dinosaurs had sensitive skin so they always tried to stay within the shade. When the park’s power goes offline, the Tyrannosaurus escape from their enclosure. The adult almost killed Ian Malcolm and Tim while the juvenile killed Ed Regis. It’s also claimed that the juvenile is a great swimmer but this most likely wasn’t true in real life. Later, Dr. Grant and the children are on a raft on the river, they see the juvenile sleeping. Lex inadvertently wakes it up and it swims after them but soon gives up and goes after the adult’s kill on the shore. Muldoon later shoots it with a tranquilizer dart which causes the creature to pass out with Grant and the children hiding behind a waterfall. It’s unknown what happened to the adult Tyrannosaurus though it’s possible it drowned. When the group leaves the island via the helicopter, they take one last look at the juvenile.

There are two Tyrannosaurus that appear in The Lost World novel. They have a nest and an infant that’s located on the eastern part of the island. Ian Malcolm and his team arrive at the island and is soon attacked by the male Tyrannosaurus when it sees them in his territory. It pretends to attack Jack Thorne and Richard Levine in an effort to force them to leave the area. Later, Lewis Dodgson’s team attempts to steal some Tyrannosaurus eggs but instead George Baselton gets eaten. When one of the creature’s infants is injured, Eddie Carr takes it back to the trailer to help it. The two Tyrannosaurus arrive soon enough and take the infant back and then pushes the trailer over the cliff. Later, the creature tries to kill Sarah Harding and Lewis Dodgson who is hiding under a car. Sarah pushes him and the T-Rex takes him back to his nest.

In Jurassic Park, the female Tyrannosaurus seen here is the largest seen in the movie series, with her length listed at 46 feet and height at 21 feet. John Hammond informs the visitors about the Tyrannosaurus soon after their arrival. When the group take a tour of the park in the Ford Explorers, they pass the T-Rex enclosure but it doesn’t make an appearance, even when they try to lure it out with a live goat. Later that night, the park’s power systems go offline and Dr. Grant, Malcolm, Lex, Tim and Gennaro are stranded outside the enclosure. 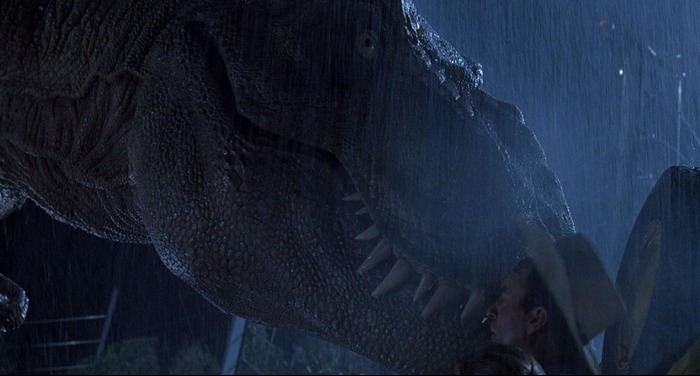 The Tyrannosaurus breaks free from the fences and wonders near the vehicles. Lex uses the torch which gets the creature’s attention. The dinosaur kill Gennaro and injures Malcolm but Dr. Grant and the children escape. Later when Ellie, and Muldoon arrive, the Tyrannosaurus returns and chases after them in the jeep but soon gives up. The next day, Grant and the children are wondering through the park and escape a herd of Gallimimus running. As the watch behind a fallen tree, the T-Rex bursts out of the nearby forest and kills one of them.  The creature makes one final appearance at the end of the movie when Ellie, Grant and the children are about to be attacked by two velociraptors. The Tyrannosaur appear and attacks them, killing one in the process and this gives the group the chance to escape the island. 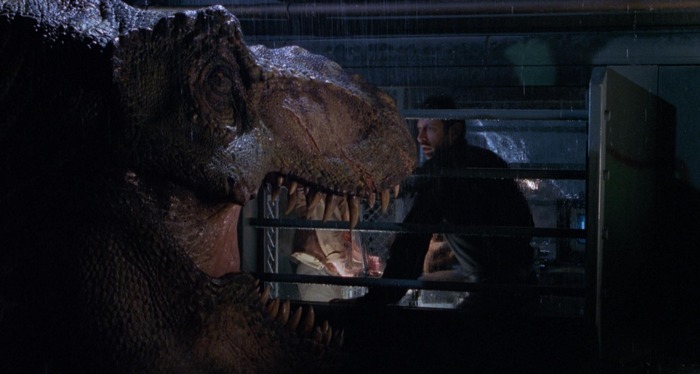 Later, the male Tyrannosaurus tracks Sarah to Roland’s camp due to the infant’s blood on her jacket. Everybody runs for their lives and a few manage to hide behind a waterfall. Several members of Roland’s team are trampled to death. Roland manages to tranquilize the creature and it’s transported to San Diego via the ship S.S. Venture. Somehow, the T-Rex breaks free and kills the entire crew. When the ship crashes into the dock in San Diego, Ludlow order the cargo hold be opened which free the creature. The Tyrannosaurus rampages through the city looking for food and water, finding a swimming pool and a dog in the process. It causes lots of damage in the city and kills a number of people. 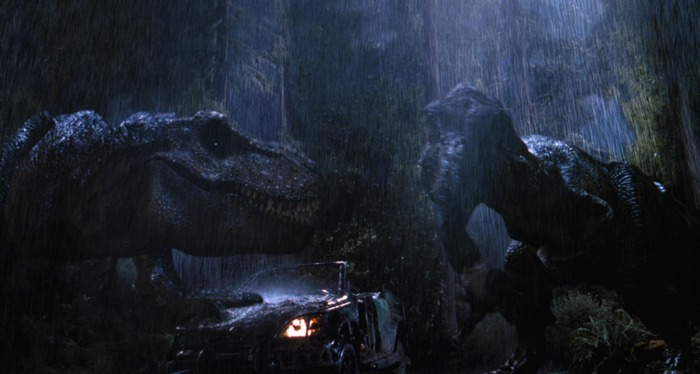 Dr. Ian Malcolm and Sarah Harding steal the infant from a facility, which had been brought to San Diego separately. They use the infant to lure the Tyrannosaurus back to the ship and trap it in the cargo hold, just before tranquilizing it. The the creature is then transported back to Isla Sorna under heavy guard. It is shown together with the female Tyrannosaur and the infant.