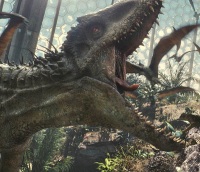 The Jurassic World reviews have started trickling out today and so far the reception for the movie has been pretty positive. It’s currently tracking at 70% on RottonTomatoes. A lot of critics are saying it’s the best Jurassic Park sequel yet with amazing action sequences and lots of scares.

You can read more reviews over on RottonTomatoes.