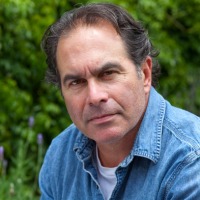 In an interview with OnCamera for Kodak, cinematographer John Schwartzman (Armageddon, Pearl Harbor) talked about the upcoming Jurassic World film, specifically about how the film will be shot.

Jurassic World, your next feature, will be shot on film – some 35 mm and some 65 mm, correct? What’s the thought process behind that decision?
The reason for that was simple: Steven Spielberg, who only shoots film. We also based the decision on the idea that the other Jurassic movies were shot on film and that these are day exterior movies. In day exterior situations, nothing surpasses film in terms of dynamic range. There’s not a digital camera in the world that can handle the difference between 20,000 footcandles in the highlights and six footcandles in the shadows, especially when you’re walking through a jungle.

And the 65 mm portions?
The large format decision grew out of our location scouting. When we told the visual effects people that we were going to shoot film, their reaction was ‘Thank goodness. Thank you for shooting film – we love it.’ That’s a nice thing to hear. They were talking about larger formats, so I suggested five-perf 65. I knew I’d need to do big, sweeping moves and carry a lot of depth of field. I knew that we could get the cameras from Panavision. Everyone at Panavision and Kodak was gung-ho about it. Plus, I’ve always wanted to shoot large format. When people see this movie, I want them to go, ‘Whoa!’ I want them to see what film can really do.