JoBlo have done an interview with Dawn of the Apes writers Amanda Silver and Rick Jaffa who also wrote an earlier screenplay for Jurassic World. The recount how Steven Spielberg was very much involved in the writing process but they don’t really know what changes Colin Trevorrow and Derek Connelly made to the film. Check out the relevant interview segments below: 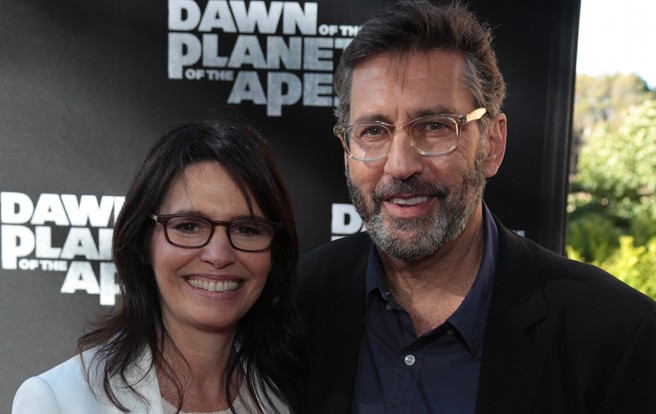 Then you went on to write JURASSIC WORLD. Was that something you sought out, or did it come to you?

Jaffa: That was different, we got a call from our agents saying Steven Spielberg was interested in meeting with us for JURASSIC WORLD. And I said, “I’m sorry, I didn’t catch the name!” [Laughs] We were very excited. The first meeting with him was fantastic.

Silver: He’s everything you imagine. He’s so collaborative.

Jaffa: We felt a personal connection with him immediately, so collaboratively there was a quick meshing of thought and ideas. We were brought on pretty quickly.

Spielberg was thoroughly involved in the writing process?

Jaffa: Oh yeah, very much so. For the longest time, maybe a year, it was just the three of us.

Do you know how much of your vision remains at this stage? I believe Colin Trevorrow and his partner did a lot of work on it, if not started totally from scratch.

Jaffa: Another thing built on what we created, but we did not work with those guys creatively. We don’t really know. We had one conversation with Colin. But we really believe in him, the cast is very cool. We’re very excited about the experience with Steven and our contribution to it.

What are some of the cool set pieces you wrote that you hope make it in there?

Jaffa: [Laughs] We can’t talk about that.

Is the old adage true, that screenwriters are paid well but treated like crap to make up for it?

Jaffa: I don’t know about the “paid well” business. The thing about being a screenwriter is, sometimes you stick with it and it works out well, and other times you’re replaced and it doesn’t work out well for the project. But if your stuff is in it and audiences are moved by it, it’s been worth it.

Silver: When it comes to JURASSIC WORLD we’re extremely grateful to have worked the way we did.