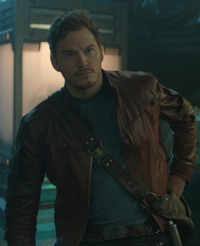 While promoting Guardians of the Galaxy, actor Chris Pratt briefly mentioned his character in Jurassic World. He says there isn’t much humour to his character but there’s humour in the film up until page 25, then he’s watching people getting eaten by dinosaurs.

In Jurassic World, the character is unlike any other one I’ve played and he’s not like Peter Quill. There’s not much humour, I think he’s a little more John Wayne than Marty McFly. He’s deadly serious. There are comedic elements in the film, just not coming from my character. Jake Johnson has a funny role and there’s that release valve of comedy throughout the course of the movie. It’s similar to the original Jurassic Park in that way, how you had Samuel L. Jackson and Wayne Knight. There’s humour but then, from page 25 on, there’s not that much to laugh about. I’m watching people get eaten and I’m trying to save the lives of thousands of people.