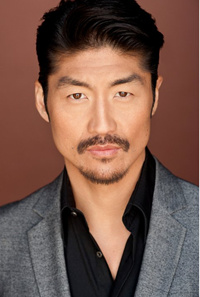 “I get to be another badass,” Tee said. “I get to play with dinosaurs here and there. I think Jurassic World is going to be bigger, badder, better than any other Jurassic Park that you’ve seen.”

I guessed that Tee might be playing a scientist, but he corrected me. “I’m Hamada. I’m the head of security at Jurassic World. Just in case something happens, because what could go wrong? There are many giant dinosaurs. They’re probably really tame in their own environment and stuff like that, so I’m just a precaution, that’s all.”

Well, at least this time the Jurassic team has thought ahead to security. They’ve even given Hamada a cool uniform. “Oh, they’re badass. Come on, it’s Jurassic World. They’re gonna be badass. You can’t have a Jurassic World and not have cool security.”

Colin Trevorrow directs Jurassic World, and Tee described his style on the set. Tee said we can expect a measured style of filming, with down and dirty work for the actors. “For what we shot, it was I think the best of both worlds. It was definitely very measured, but when you’re in the world itself, you’ve got to represent that particular aesthetic. So he was definitely in the trenches with us. We’re rolling through mud and dirt and trees and bushes and swamp and all this other stuff, and he was in there getting dirty. Absolutely.”