OnLocationVacations have posted the first pictures of the set construction taking place in Kualoa Ranch in Hawaii for Jurassic World. The Gallimimus scene from Jurassic Park was filmed in Kualoa Ranch. 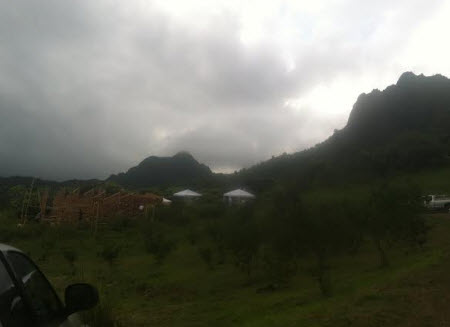 Set construction is underway at Kualoa Ranch, where the original film was also shot back in 1993, and can be seen from the Pali Lookout, near Chinaman’s Hat and the fishpond. Our tipster also spotted directional signs posted at the construction entrance that say EBB.

EBB Tide is actually the production name for Jurassic Park 4.