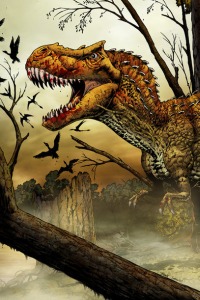 JoBlo’s have posted some major Jurassic World spoilers about the theme park as well as the dinosaurs. They generally confirm what we already knew in that Jurassic World will be a theme park with various attractions and a monorail like we saw in the leaked concept art.

Building on our original scoop: JURASSIC WORLD will be a real running theme park, complete with a monorail (as teased in recent concept art above), shops, rides, and shows. It’s the most popular theme park and a family destination. To get there you have to take a high speed shuttle boat from Florida. Inside the park there are a multitude of activities, including a Dino petting zoo and a Hologram info center where you can learn about the methods they are using to create dinosaurs (an enhanced version of the original one). One of the rides is called a “Gyrosphere” that you can get in and ride around in the wild to get up close to the Dinos.

The big spoilers come below about the central dinosaur. Apparently, it’s a a dinosaur specifically created with a mixture of DNA from a T-Rex, Velociraptor, snake and cuttlefish. Not sure how I feel about that if it’s not a real dinosaur. I guess we’ll have to wait and see what it looks like.

Business is good at the park, but the powers that be start to dream up new ways to keep customers coming back; namely by splicing Dino DNA with other dinos (and other species). That becomes the problem. They splice together a T-Rex, raptor, snake, and cuttlefish to create a monstrous new dino that, of course, gets loose and terrorizes the park. Nothing like a little greed and human arrogance to ruin a good thing, right? Dino expert Jack Horner has teased this bad boy since last year and now we have an idea why he says we’ll want to “keep the lights on” after seeing it. He may be right.

According to our source, there will be lots of Dino on Dino fighting, as some of the Dinos are “good guys” that are trained by Chris Pratt’s character. The raptors and T-Rex are among the “trained” good dinosaurs. The big bad dinosaur has instant camouflage abilities, like the cuttlefish, so he blends into the background, is smart like the velociraptor, uses his jaw like a snake, and can terrorize like the T-Rex. Does this mean the new dino will be the ONLY “bad” one? Or will there be more than one? Unconfirmed, but it will be the catalyst that kicks off the peril.